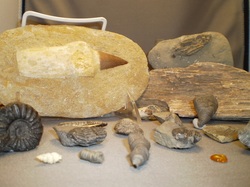 Humans rule the modern era, but this wasn't the case thousands of years ago. Tens of thousands of years ago large mammals roamed the North American and Siberian plains, before them it was the time of dinosaurs, large armor plated fish dominated the seas before them while plants began to flourish on land. Life has evolved over the billions of years since its birth, exploding at times and diversifying into sometimes bizarre off shoots. But many of this diverse array of life is no longer with us. Mighty brachiosaurs no longer shake the earth as they walk by, opabiniae no longer swim through the seas seeking prey with their five eyes, giant sloth no longer grope the trees seeking a quick meal. But they have left their mark on the planet; they left us clues so that we may understand their time. They left us fossils. 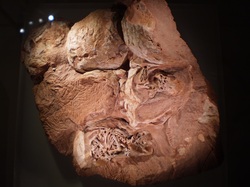 Fossils come in all varieties of types. Most people know of the 'bones' that are left behind by the great beasts like dinosaurs. These however are not actually the bones, they are solid rock that replaced the original bony material over millions of years. However, the fossils record isn't limited to these casts but rather come in many other forms. Trace fossils such as burrows, tracks, and droppings all give insight into the lives of ancient extinct creatures. Ice and tree sap can also create interesting fossil specimens, usually preserving the entire animal. Even impressions can provide a rough outline of the original animal, depicting what it actually looked like in the past. The fossilization processes has allowed us to understand the evolution of life and the history of the world.
We in the Collections of Fossils here at the Sholesonian take great pride in our collection, as most of the specimens were collected by hand by us, rather than purchased. They mostly represent the fauna that used to live in Central and Western New York millions of years ago, but there are some from plenty of other places. Unfortunately, as of right now most of the collection has yet to be cataloged and even sorted into groups by locality and genus/species. This large undertaking will hopefully be accomplished by the end of 2011, though there will be plenty of new specimens coming in each new year. Many of them have yet to be identified as well, so rather than listing off all of the ones that have already been numbered, this page will only list the ones that have been posted up and listed in numerical order rather than by category until further work can be done. As always if you have any questions about a particular piece or the collection as a whole feel free to email the museum.